The 601st had seven MSQ-1A Operating Locations. Marty served at OL-7, in Wunstorf, Germany and later was the NCOIC of Operations at Rothwesten for 18 months prior to early 1963, when the unit was disbanded.

We asked Marty if he was willing to share more information about the 601st TCS and he was kind enough to send us the following information.

On November 18, 1960 it was redesigned as the 601st Tactical Control Squadron.

For a period of six months extensive training was conducted to qualify AC&W RADAR operators and controllers in the use of the MSQ-1A System.  This to prepare to assume tactical weapons control along the East German Border.  From April 15, 1961 until June 15, 1962 the unit operated electronic Target Director Posts (TDPs) in support of a tactical missile mission.  On June 15, 1962 the 601st had won its first Air Force Outstanding Unit Award and became part of the USAFE TACS.

When the TM-61-C Matador lifted off the rails in West Germany and started East it was unguided and became the responsibility of units of the 601st TAC Control Squadron to get it to its destination.

The 601st TCS with headquarters at Rothwesten, Germany was composed of several Operating Locations (OLs) situated along and near the East German border.  These units were equipped with the MSQ-1A RADAR with a mission of providing guidance (if necessary) to the TM-61-C Matador and to fighter/bomber aircraft carrying Tactical Weapons.

Operationally, personnel were required to obtain weather and compute hourly the ballistics of the Matador and free fall bombing from various altitudes.  We
then plotted a release point on a moving grid plotting board for actual and training targets. Our computer was a Manual Olivetti. Matador training missions were
simulated using a T-33 which used the J-33 engine, same as the Matador.  The pilot followed directions keyed to him from the TDP on a Rosette in the cockpit. He simulated spoiler activation for turns by quick pulses of the ailerons. Fighter / bomber guidance was by voice command.

Our normal Alert Posture was Quick Reaction Alert.  When the Flag went up, real or simulated we would not know if it was training or real until we locked on to the
Target. If we received one blip on an A Scan display it was a Matador on the way East. If it was two blips on the same Scan it was a T-33 (dual tone) simulating a Matador heading East.

Our Units were highly mobile and were exercised by surprise deployments into the Field. During the Berlin Crisis and Cuban Crisis we were on high alert for deployment.

On 15 June 1962, HQ USAFE reassigned the 601st TCS from the 38th TMW to the 17th AF and the 601st again started a change in missions by developing and deploying units that were co-located with Army Units in a close air support role. 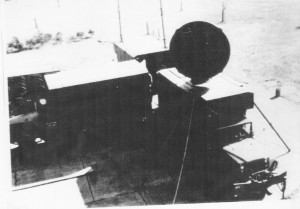