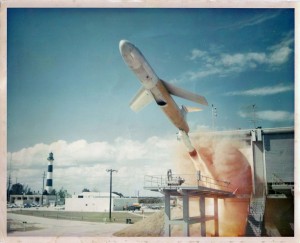 After posting the photo above, we received the following comment:

Message:
I was on the launch crew.  JKF had just made his famous speech re-Cuban Missile Crisis, “Any attack by Cube-ah on the United States will be viewed as an attack by Russia-ah upon the United States…….”  Just a few days prior to this launch. I will never forget watching his speech from the Camp Happiness Day Room and thinking I am up for discharge in less that 60 days and he is picking WW III …….

Florida looked like an Army Base, there were anti-aircraft guns & missiles dug into the public beaches.

Some “jokers” had drawn a big heart & arrow on the side of this bird and written “To Castro With Love” which the Captain saw and made us wipe it off.