In your latest edition of your news letter you asked “Do any of you know of or recall an explosive or blast warhead that was available for installation in the Matador? Does anyone know of any armament types who once worked on the Matador that we might contact for further information about this blast warhead?”

I was the Armament crew chief for the 69th TMS 1954-1957 We seldom played with the blast warhead it just had a fuze that screwed in similar to a standard HE bomb only difference was instead of propeller that armed it after it fell from plane this had a electric motor that armed it after it got underway. My main job was firing & fuzing technician for the nuclear war head. here is picture of me & another crew chief that made Der Speigal” German equal to Newsweek. It also made CO’s board on how not to do it. I am in front guiding Bob Pierson other crew chief is on launcher straddling cable. Other picture is our crew I am tall one in center Bob is pointing at me. Person Immediately W. Wilis to my back died about 1 month after this — I think base commander said pneumonia or something. Actually procedures for using Triclorethaline changed AF wide in about a week after it. 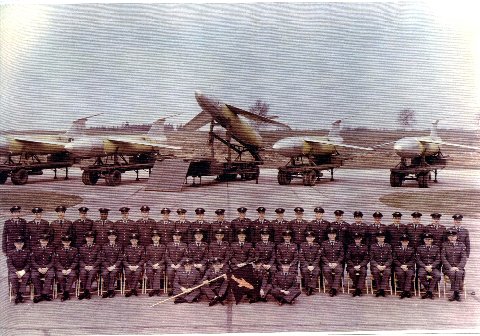 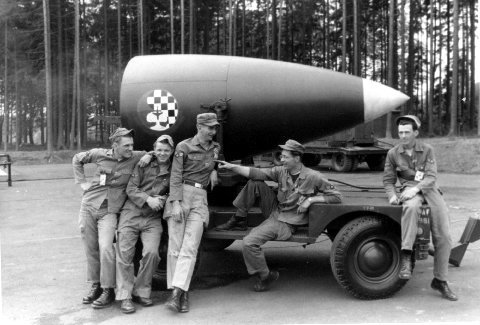