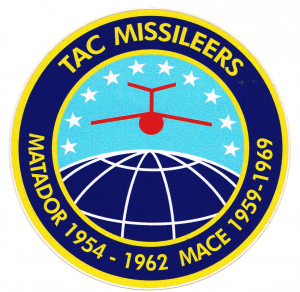 I’ve been getting some interest in having some tee shirts made that reflect the TAC Missileers organization. The shirts would be screened printed. I personally think it would be a great idea and have decided to pursue this endeavor.

My idea is to have the shirts screened printed with the 4″ TAC Missileers patch on the left upper side of the shirt above a pocket. Over the patch would be lettering reflecting what base or bases you were stationed at, such as in my case would be Hahn-Bitburg. Below the patch would be the country such as Germany. Below this and probably on the pocket would be the missile badge.

I have been in contact with a vendor asking about cost. It appears the cost range would be from $30.00 to $50.00. Size of the shirt has a lot to do with the cost. Any size above large is more expensive. The shirts would be top notch material.

I, of course would like some immediate feedback on this subject as I would like to have some shirts made for the reunion, especially for anyone planning on attending. By the way, color of the shirts would probably be Air Force blue unless someone would want a different color.

I have been in contact with our officers and they think it’s a good idea also.