In order to keep Missileers “in the loop” concerning the “Wildwood Mace,” I (Frank Roales) submit the following:

An Engineer’s drawing and model for the new Indiana Military Museum has been completed and the model has been placed on display in the George Rodgers Clark National Memorial’s visitor’s center in Vincennes, IN.

Phase 1 of the Museum’s program has been completed with the purchase of 14 acres of land near the National Memorial, adjacent to the French Commons used for the “Spirit of Vincennes Rendezvous” in the main historical area of Vincennes.

Present plans for Phase 2 call for the remolding and adapting of two buildings now on this property starting at the end of 2010, with the target of moving the present storage and restoration facilities to the larger of the two and the present museum in to the other. This will call for moving all items in storage and those on display at the current museum to the new more centrally located facility. This facility is somewhat smaller than the present location so some condensing of present displays will need to be done and while some display space will be temporally lost in this part of the plan, the new location will bring more visitors to the museum and help with the final phase of the museum’s plans. This timetable is dependent on the raising of approximately $300,000 before next year’s season.

In the final phase (Phase 3), funds estimated at 10 million dollars will be raised and a state of the art 69,000 sq. ft. main structure as seen in the pictures will be built. Building 2 will then be used for traveling exhibits, education and meeting facilities.

As now shown on the engineering model the Mace will be displayed near the entrance fountain at the main entrance road to the museum (see photo). What a great place for “our bird” 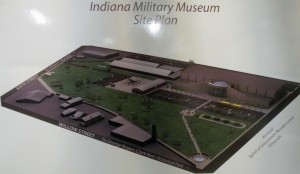 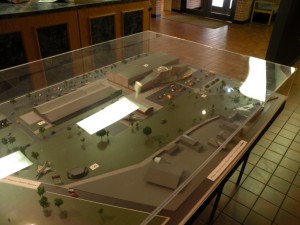 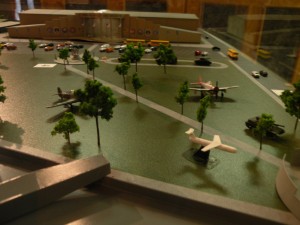 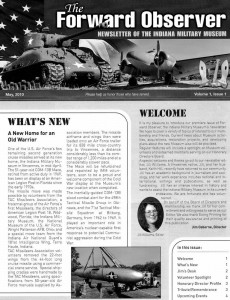 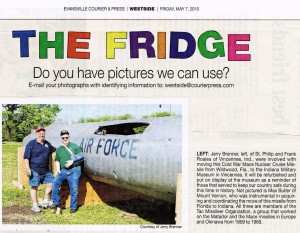 Frank Roales has created a video of the Wildwood Mace’s (CGM-13B – S/N 59-4871) arrival in Indiana on April 15th, and at the Indiana Military Museum April on 16th. Be sure to check it out. Thanks Frank!

George Mindling has created a great video of the Mace “Move” Day activities at American Legion Post 18, Wildwood, FL on April 14th. Be sure to check it out. Thanks George! 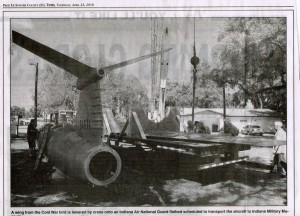 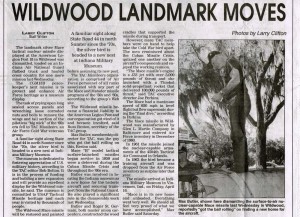 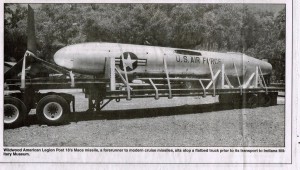 Just received call from Jerry Brenner.  The Mace is in its new “home” (Indiana Military Museum) and unloaded.  Everything went very well.  Jerry said the drivers (Indiana ANG) were super in their help in the unloading process. We can all rest easy now. I may even sleep tonight. We should all feel very proud of what we have accomplished. GOOD JOB!!!

Be sure to checkout the ‘Arrival in Indiana’ photos here.

People on hand in Vincennes: 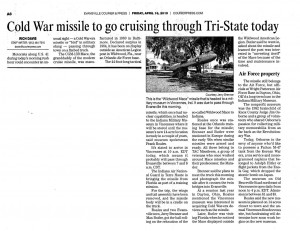 Received a call from Gunny, ANG driver about 2 hrs ago.  He said everything went smooth as silk with the transport.  They are now just north Of Evansville, IN, where they will stay the night.  In the morning they will depart for Vincennes, In. which is about an hour away.  Due in there at 10:00am.

Jerry Brenner just called me, saying he is at the location of the Mace, and people are everywhere, taking pictures and asking questions.  He also said a reporter from the Evansville Courier and Press, as well as a reporter from one of the TV stations, is supposed to meet him at the site to interview him regarding the Mace.  Jerry said he also took great video and pictures when the Mace came across the Ohio river into Evansville, at Henderson, Ky.  He also took video as he was following the transport thru Evansville, and to the site it is now at.  He said people were really interested as it passed thru Evansville.  While giving “talks” at the site, Jerry said he has told people that “you have made a whole lot of former Missileer Veterans very proud in showing interest in this missile”.  So, I’m sure there is probably a large crowd viewing the Mace, by now, as it is parked just a stone’s throw south of I-64 & hyway 41.

There is also supposed to be a welcome when it arrives in Vincennes, in the morning. My oh my, won’t we have a lot to talk about and pictures to show, in San Diego?

The Wildwood Mace wings and tail have been removed, and it has been loaded on to a flatbed trailer. It is currently in route to Vincennes, IN. and expected to arrive on Friday, 4/16. It is being transported by the Indiana Air National Guard, 181st IW/CCE. Be sure to checkout the ‘Wildwood Move Day’ photos here.

People on hand in Wildwood: 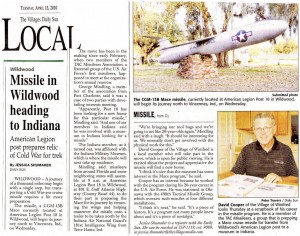 Max has received word that Indiana Air National Guard will move the missile from Wildwood to Vincennes.

Lt. Randi Brown at the 181st Intelligence Wing, based in Terre Haute, IN, called Max yesterday (Mar. 25th), and advised that they support our efforts to preserve AF heritage.  They would like to participate in relocation of the ‘Wildwood’ Mace to Indiana Military Museum.  They have the necessary people and equipment (e.g., drivers, truck and flat-bed trailer).

The move is now scheduled for Wed., April 14th. Max has confirmed that the crane service will be available on this date.

If you plan to participate in the activities in Wildwood, FL on April 14th, please send me (Russ Reston) an email so we will know how many ‘sets of hands’ will be available to help.  Thanks!

George Mindling has created a great video of the Mace “Scope” Day activities at American Legion Post 18, Wildwood, FL on March 15th.  Be sure to check it out.  Thanks George!
Mace ‘Scope’ Day

Max Butler and Roger St. Germain (two ‘master union carpenters’) spent a grueling day constructing the cradles that will be used for the missile’s  transport. Check out the photos here.

Bob Bolton would like to share some of the photos he took on “Scope Out” Day.  They can be found here.  Thanks Bob

‘Scope out’ Day – Max Butler and his team of TAC Missileers were on site in Wildwood, FL. to plan next month’s (4/17/10 – 4/18/10) move.  Assisting Max were Joe Perkins, Bob Bolton, George Mindling, John Gibbs, Jack Davis and Roger St. Germain. Evidentially the team had an enjoyable day. Max commented “Wish you could have been with us as we had a wonderful time acting like monkeys on the Mace.”

The National Museum of the US Air Force at Wright Patterson AFB has granted approval for relocation of the ‘Wildwood’ Mace to to the Indiana Military Museum.

Max Butler will be spearheading the move on behalf of TAC Missileers and the Indiana Military Museum. Other TAC Missileers in the Wildwood area will be providing assistance. The move is planned to be completed before May 1st. (Shipment from Wildwood is targetted for April 17th/18th.)

We are still trying to gather information about the missile. Based on materials provided by American Legion Post #18, the missile appears to have made it’s ‘home’ in Wildwood since the 1970s.  Records from the National Museum of the Air Force indicate that the missile nomenclature is “CGM-13B, Mace, S/N 59-4871.”  This is consistent with the number currently displayed on the missile’s tail.  And yes, it is ‘officially’ a Mace B.

The plaque mentioned in the news clipping was never implemented.

The overwhelming response received from the TAC Missileers membership has been in support of the organization’s involvement with coordinating/funding the Mace relocation from Wildwood, FL to the Indiana Military Museum in Vincennes, IN.

Max Butler is working onsite with American Legion Post 18 in Wildwood, to gather as much information as possible about the missile, and to assist in preparations for its relocation.

We are still awaiting for USAF approval for the relocation.  Hopefully it will be received while Max is still in Florida.

Recently, we learned that a Mace, currently displayed on the grounds of American Legion Post 18, in Wildwood, Florida is “looking for a new home.” Knowing that the Indiana Military Museum in Vincennes, Indiana is interested in acquiring military items for display, Max Butler contacted TAC Missileers member Frank Roales and he confirmed that “YES,” they would be ”VERY” interested in adding the “Wildwood” Mace to their collection.

The Mace belongs to the USAF and approval is needed to allow its relocation. The TAC Missileers officers are currently investigating providing assistance to the Indiana Military Museum, with acquisition of the Mace. The museum is dedicated to fostering the memory, understanding, and appreciation of U.S. military history. It is in the process of funding / building a new expansion and can provide an excellent opportunity to display the Mace and associated USAF Tactical Missile heritage. Each year the museum is visited by thousands of people.

The mayor of Vincennes has submitted an official request to the Museum of the USAF in Dayton, seeking approval for movement of the missile from Wildwood to Vincennes. The approval is expected soon.

Upon approval, we would like to assist the Indiana Military Museum by coordinating and funding the missile relocation to Vincennes. Total expense would be approximately $2,500 ($1,850 for trucking / $750 for crane rental / insurance, etc.). (TAC Missileers has sufficient funds on hand to adequately cover this expense, without causing any financial concerns.)

The Mace is in reasonable shape, but does need painting and some minor restoration, which will be the responsibility of the Indiana Military Museum. As part of their display, they will acknowledge the TAC Missileers involvement in obtaining the Mace. Max has contacted the Museum of the USAF to see if they can provide any history of the missile, based on its tail number (#94871).

Information about the Indiana Military Museum can be found at www.indianamilitarymuseum.org.

The TAC Missileers officers would like to confirm that the membership supports this endeavor to preserve and proudly display a key part of our heritage.

Please send us your comments…